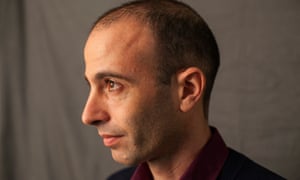 Yuval Noah Harari is an Israeli historian who has afflicted us with his know-it-all debunking, in three books: Sapiens, Homo Deus, and 21 Lessons for the 21st century.

I got fed up with Harari after reading Sapiens and my impatience with his doctrines has been clarified by a reading of 21 Lessons for the 21st century.

Basically Harari insists we do not have free will. More importantly, he asserts that all human stories – myths, religions, creeds – are wrong answers. He uses the words “wrong answers” in the same sense as someone who dials the wrong number, or answers “42” to the question, “what is the meaning of life?”.  Instead of political correctness, it is philosophical correctness.

Harari is a gay vegetarian who practices meditation for two hours a day. He is a Buddhist. In that sense, his views are the expression of  what I think is orthodox Buddhism.

The core of his argument is contained in the chapter ‘Meaning’ in 21 Lessons, at page 285.

“While a good story must give me a role and must extend beyond my horizons, it need not be true. A story can be pure fiction, yet provide me with an identity and make me feel that my life has meaning. To the nest of our scientific understanding, none of the thousands of stories different cultures religions, and tribes have invented throughout history is true. They are all just human inventions. If you ask for the true meaning of life and get a story in reply, you know this is the wrong answer. The exact details don’t really matter. Any story is wrong, simply for being a story. The universe just doesn’t work that way.”

Any Christian, Jew or Muslim will tell you, if they have thought about truth and story deeply enough, that the Story they live by is the criterion of truth, that meaning in the world is given by the story, not the story given the meaning by forces extraneous to it. They have different stories and hence constitute different religions, because they link back to different ideas of what story the adherents shall be guided by.

Each religion contains disparate elements, and thus allows for different stories to be told. Try reconciling the Gospel of John with those of Mathew, Mark and Luke, if you need evidence for differing elements in the sacred texts of a major world religion. Religions spring up as new stories are told: think of Islam, Mormonism, Communism, Christianity, and so forth, without end.

Truth is not therefore a proposition, such as 2+2=4, or e=mc², though both are truthful equations.

Harari also disputes the liberal version of storytelling, that it is I who gives meaning to the world. The world has no need of meaning, he says, following the Buddha.

We do not govern our brain, our feelings, or our reactions to our feelings, he says. With that I agree, but he nowhere seems able to get beyond a truly presumptuous arrogance that, because our “truths” are embedded in stories, there is no truth, no meaning, nor need to create a meaning. This may be orthodox Buddhism. I do not know enough about Buddhism to be sure.

If I have no control over my desires, or my urges, I see no way in which to educate myself, my feelings, or my behaviours. Nor can we expect anyone else to effectively influence my behaviours. This idea is immediately refuted by the experience of every child growing up under the influence of parents and educators.

Harari constantly emphasizes our inability to tell the difference between fiction and reality, as if “reality” were itself not a fiction we have invented. I have bad news for Harari: it is all fiction. We change by having new metaphors, and guiding ourselves by them. Reality does not exist outside of our fictions. Our sufferings take place inside our maps of meaning. Some people just have different maps of meaning, but no one, not even Harari, is without his fictions. He thinks his Buddhism has brought him to the place of no fictions. Suffering without a fiction to explain its meaning: that is his remedy for dependence on stories.

Just as you cannot pick up the gross national product with a set of tongs, because they belong to two different orders of being, so you cannot pick up meaning without having the metaphorical instrument by which to apprehend it, which is a story. That is all we have had so far, and even if the stories are illusory in some sense, they are also our proven ways of getting as far as we have, from wandering the Serengeti devouring dead food to running the planet.

He concludes his book with:

“So if you want to know the truth about the universe, about the meaning of life, and about your own identity, the best place to start is by observing suffering and exploring what it is. The answer isn’t a story”.

That is as unprovable an assertion as that God manifested himself in Jesus, and it is, inevitably, just another story that Harari is peddling. Truth is found in fictions, it is such stuff as we are made of. I doubt we can do better than to try to live in better fictions and, as I have already related, our fictions are often the criteria by which we are obliged to judge the fictions, the world and its inhabitants.  We need fictions by which to live as birds need feathers to fly. Some of those fictions we hold to be true, and others we hold to be self evident, even as they are the results of previous iterations of our governing  fictions. If this seems circular, it is, in part, but there is a crack in everything, and that is how the light gets in. As that is yet another story, I rest my case.

After reading Sapiens I had had quite enough of his tortured logic used to justify his lifestyle so I admire your tenacity in continuing to engage with his material. In reading his first book I believe I had suffered enough – and he is right, it ain’t a story.

Thanks Gerry, I was provoked because my wife bought the latest book and it was lying around unread. Then I analyzed it: yellow-marked the important points and quickly got to its core messages.
There is an admirable quote from Robert Frost, that a man must have a certain coarseness to his nature if he is to thrive in the is life. Having watched Harari on youtube with enough frequency to see where he is coming from, I think he lacks that essential fibre. If you cannot ethically kill a chicken, you should not eat meat. But if you cannot kill a chicken, you are too refined for mankind.

Thanks for the Frost quote and chicken analogy, I will use it repeatedly

we are all the sum total of what we experience and learn, good or bad. sometimes with a bit of insanity thrown in.