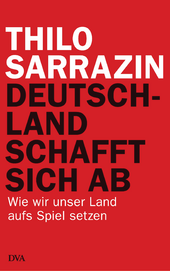 The other night I listened to two intelligent Germans discuss the state of Germany and the Islamic threat to it. In brief, it is worse than it is reported, and that under-reporting is the essence of what they complain about. The political establishment – all three major parties – are devoted to preventing public discussion of what people perceive with their own eyes.

They observe from the news they gather from informal channels, such as friends and gossip, that there is much more Islamic crime than reported. Islamic crime has had the effect of rendering German women much less safe than they had been within recent historical memory.

Now none of this is news. It  was apparent from the tone and substance of what my guests were saying that:

In passing they mentioned the case of the writer Thilo Sarrazin, whose book, Deutschland schafft sich ab (Germany is abolishing itself) has created a huge stir.

Citing the Wikipedia article, which mentions his book:

Within two months, Sarrazin’s book Deutschland schafft sich ab (Germany Is Doing Away With Itself or Germany Is Abolishing Itself), published end of August 2010, became the best-selling book on politics by a German-language author in a decade, with overall sales hitting 1.1 million copies[4] and the first editions sold out within a matter of hours or days. In the 13th edition Sarrazin added a foreword commenting on the nationwide debate his book has sparked.[22] As of May 2011, 1.5 million copies had been sold.[23]

Sarrazin advocates a restrictive immigration policy (with the exception of the highly skilled) and the reduction of state welfare benefits. There were severe reactions to his statements on economic and immigration policy in Berlin, which were published in September 2009 in Lettre International, a German cultural quarterly. In it he described many Arab and Turkish immigrants as unwilling to integrate. He said, among other things:

Integration requires effort from those that are to be integrated. I will not show respect for anyone who is not making that effort. I do not have to acknowledge anyone who lives by welfare, denies the legitimacy of the very state that provides that welfare, refuses to care for the education of his children and constantly produces new little headscarf-girls. This holds true for 70 percent of the Turkish and 90 percent of the Arab population in Berlin.[24][25][26]

He has also said regarding Islam, “No other religion in Europe makes so many demands. No immigrant group other than Muslims is so strongly connected with claims on the welfare state and crime. No group emphasizes their differences so strongly in public, especially through women’s clothing. In no other religion is the transition to violence, dictatorship and terrorism so fluid.”[27]

Sarrazin’s statements were criticized by the chairman of the Interior Committee of the German Bundestag, Sebastian Edathy (SPD), the ver.di union and the political scientist Gerd Wiegel. The Central Council of Jews in Germany has strongly criticized Sarrazin, condemning him as racist.[28][29][30] Sigmar Gabriel, the General Secretary of the SPD, condemned Sarrazin for his eugenic approach.[31]

Sarrazin’s book came under criticism for claiming that Germany’s immigrant Muslim population is reluctant to integrate and tends to rely more on social services than to be productive. Moreover, he calculates that their population growth may well overwhelm the German population within a couple of generations at the current rate, and that their intelligence is lower as well. He proposes stringent reforms for the welfare system to rectify the problems.[32][33] The first edition of his book sold out within a few days. By the end of the year, the book had become Germany’s number 1 hard-cover non-fiction bestseller for the year and was still at the top of the lists.[34]

and further from the article:

Henryk Broder, the Spiegel commentator, offered an explanation for attacks on Sarrazin’s statements. “And there’s a second trick that’s being used now: he’s being accused of anti-Semitism. If you could accuse him of anything, it’s philo-Semitism, because he wrongly thinks Jews are more intelligent than others,” Broder said. He added, “But of course, with an anti-Semitism accusation you can really go after someone, because anti-Semitism of course is no longer acceptable in Germany, and rightly so. There is no substantive debate here at all – the issue is that a nation gets up, as it were, they all agree and they take it all out on a scapegoat who they’d like to send into the desert. It’s very disturbing.”[44]

“Political correctness is silencing an important debate” said Matthias Matussek (de) of Der Spiegel magazine. “Sarrazin’s findings on the failed integration of Turkish and Arab immigrants are beyond any doubt. He has been forced out of the Bundesbank. The SPD wanted to expel him from the party, too. Invitations previously extended to Sarrazin are being withdrawn. The culture page editors at the German weekly Die Zeit are crying foul and the editors at the Frankfurter Allgemeine Zeitung are damning Sarrazin for passages he didn’t even write. But what all these technicians of exclusion fail to see is that you cannot cast away the very thing that Sarrazin embodies: the anger of people who are sick and tired—after putting a long and arduous process of Enlightenment behind them—of being confronted with pre-Enlightenment elements that are returning to the center of our society. They are sick of being cursed or laughed at when they offer assistance with integration. And they are tired about reading about Islamist associations that have one degree of separation from terrorism, of honor killings, of death threats against cartoonists and filmmakers.[45]