As the media go hysterical over Trump and Putin meeting, it is important to ask yourself this question: who gains by making Russia the bogeyman? Instead of, say, Islamic terrorism, Islamic invasion of Europe, mass emigration from Africa or Mexico, or the advent of thinking machines, autonomous cars, and microbiological weapons? Eh?

As Spengler observes, Russia has always been governed by thugs, and on the scale of Stalin or Lenin, Putin’s long list of assassinations is less than the first 3 days following the  Bolshevik Revolution of 1917.

President Trump offended the entire political spectrum with a tweet this morning blaming the U.S. for poor relations with Russia. “Our relationship with Russia has NEVER been worse thanks to many years of U.S. foolishness and stupidity,” the president said, and he is entirely correct. By this I do not mean to say that Russia is a beneficent actor in world affairs or that President Putin is an admirable world leader. Nonetheless, the president displayed both perspicacity and political courage when he pointed the finger at the United States for mismanaging the relationship with Russia.

The hysterical shouts of “treason! Munich! disgrace!” are a sure sign that the Party of Davos  is offended, and they are getting really scared that the changes they deplore keep on happening despite their shrill control of the mainstream media.

Something new is aborning, and like all births, it is messy, bloody, shitty and horrible to look at. But wipe off the baby and cut the umbilical cord, tie it up and tuck it in and you have a new baby. The birth of the new will look ghastly for a while but the process of replacing the Post World War 2 American Imperium with something else is underway. As Steve Bannon says, “we don’t want a European protectorate, we want a European alliance.”

Mostly we want to go on living as nations, and not as helots in service of the Davos crowd.

John Brennan, Obama’s CIA director, has not exactly adapted to the news.

John Brennan, who led U.S. intelligence under Barack Obama, wrote on Twitter: ‘Donald Trump’s press conference performance in Helsinki rises to & exceeds the threshold of ‘high crimes & misdemeanors’. It was nothing short of treasonous.’

You may expect more of the same. Unless you realize that the world is changing before your eyes, and that the US Deep State in particular does not want to change its anti-Russian focus, nothing will make sense. As Orwell once noticed, it is hard enough to see what is in front of our eyes. It is not treason, it is the downgrading of the threat from a declining Russia to its actual proportions. In the meantime, beware of Russians bearing soccer balls, but not more than one should be wary of open borders, Davos thinking,  intersectionality and the decline of educational standards.

The last time I can remember an event so large was the fall of the Soviet Union, but the important fact is that this time the change is happening here. 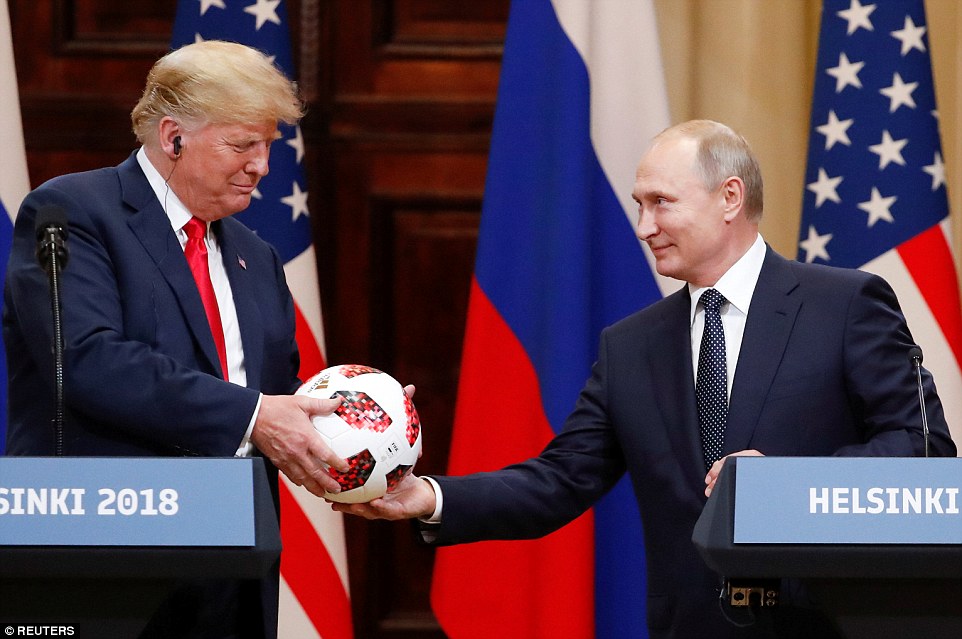 can you say “peace in our time”?

There is not a diminution in the US as imagined by “conservatives”, and I consider myself “righter than right”, to not imply imply Fascist, but, the fact is, as the LEft has danced around Social Marxian Critical Theoretical garbage, much on the right, in their concern for loss, has followed the lead and practice of the Left. Personally, I am an Independent, and abhor the trivialization of all important issues to ideological posturing on the Right and Left. Such, is generally, the reuslt of a thinker, tooo reliant upon what they have heard, from those they prefer, then actualy thoughts on the matter.

Am glad that Trump is focused on current account deficit, saddened by how his understanding of Economics and Finance doesn’t extend to how his tax cuts make addressing the CA more difficult. Further, befuddled at why we would want to give Global Capital a tax cut, when money printing, and access to US capital markets only distorts asset values in a world of lessening Demand to GDP. This as there remains the need to service Global Capital’s money printing and the false asset values they engender and how this becomes more onerous to the US, as we provide the reserve currency.

Am glad to see Trump shaking up the Global Trade regime and letting others know that more is required of them if we are to continue to pay for Global Public Goods of the Common.
While I think Trump to be driven more by some boldness, a certain naivete, and some need to pander to the “fake news” believed by his base (of too much polling of a confused polity), in terms of Russia, again, am glad to see him stirring the pot. It does concern that he met privately, but there is the potential for Putin to be able to squeeze through doors that Trump opens in having a more realistic worldview, and altering Russia’s policy from positions of seeming strength, in terms of his base. We will see if it happens.

A little innovation in these matters, if clumsy, might not be a bad thing.
Similar to North Korea, chances of success very limited, but a new tactic is not always a bad thing.
I completely ignore all press entirely, they have become far too enamored of ratings, only specialists.

Thank you for your comments. Are you new to Barrelstrength?