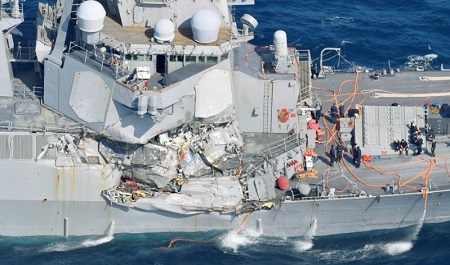 From the blogsite “The other McCain”

An anonymous email came in over the transom this morning:

Hi, Stacy.
During the early weeks after the USS Fitzgerald was speared by a lumbering Philippine container ship, it was noteworthy that the captain and a couple of admirals were publically named, but not the actual officer in charge, the officer of the deck. (OOD) The other person who should have kept the Fitz out of trouble is the person in charge of the combat information center, the Tactical Action Officer. That individual is supposed to be monitoring the combat radar, which can detect a swimmer at a distance of two miles.
Not until a year later, when the final reports are made public and the guilty parties have been court-martialed, does the truth come out. The OOD was named Sarah, and the Tactical Action Officer was named Natalie, and they weren’t speaking to each other!!! The Tactical Action Officer would normally be in near constant communication with the OOD, but there is no record of any communication between them that entire shift!
Another fun fact: In the Navy that won WWII, the damage control officers were usually some of the biggest and strongest men aboard, able to close hatches, shore up damaged areas with timbers, etc. The Fitz’s damage control officer was also a woman, and she never left the bridge. She handled the aftermath of the accident remotely, without lifting a finger herself!
Look it up: The OOD was Sarah Coppock, Tactical Action Officer was Natalie Combs. . . .
When I noticed last year that they were doing all they could to keep the OOD’s name out of the headlines, I speculated to my son that it was a she. Turns out all the key people (except one officer in the CIC) were female!

Indeed, I did some searching, and Lt. Coppock pleaded guilty to dereliction of duty. Lt. Combs faced a hearing last month:

In an 11-hour hearing, prosecutors painted a picture of Lt. Irian Woodley, the ship’s surface warfare coordinator, and Lt. Natalie Combs, the tactical action officer, as failing at their jobs, not using the tools at their disposal properly and not communicating adequately. They became complacent with faulty equipment and did not seek to get it fixed, and they failed to communicate with the bridge, the prosecution argued. Had they done those things, the government contended, they would have been able to avert the collision.

That two of the officers — Coppock and Combs — involved in this fatal incident were female suggests that discipline and training standards have been lowered for the sake of “gender integration,” which was a major policy push at the Pentagon during the Obama administration. It could be that senior officers, knowing their promotions may hinge on enthusiastic support for “gender integration,” are reluctant to enforce standards for the women under their command.

This was the story of Kara Hultgreen, the Navy pilot who died in a 1994 F-14 crash. Investigation showed that Hultgreen had been allowed to proceed in her training after errors that would have meant a washout for any male pilot. But the Clinton administration was pushing for female fighter pilots, which resulted in a competition between the Navy and Air Force to put women into these combat roles. It is not necessary to believe that (a) women shouldn’t be fighter pilots, in order to believe (b) lowering standards for the sake of quotas is a bad idea. Of course, you may believe both (a) and (b), but it is (b) that gets people killed.

It seems obvious that the Pentagon (and the liberal media) sought to suppress full knowledge of what happened to the Fitzgerald in the immediate aftermath of the June 2017 incident that killed seven sailors, in the same way the details of Kara Hultgreen’s death were suppressed. It took investigative reporters like Rowan Scarborough of the Washington Times a lot of hard work to find out what actually happened to Hultgreen. Let’s hope other reporters will dig into what’s happening in our military with the “gender intergration” agenda at the Pentagon now.

The OOD bears most responsibility. The TAO is surely culpable. But one must ask what the rest of the enlisted personnel in the CIC were doing? Their equipment would have shown the risk of collision. The USN is not so autocratic that experienced sailors would be afraid to speak. The CO bears responsibility for having permitted such an incompetent officer to have charge of the ship as OOD. The TAO has duty to observe but the OOD has duty for navigation and safety of ship.

at first I decided I would not comment until I read more. GET WOMEN OFF SHIPS AND OUT OF ANY COMBAT POSITIONS.